Why we’re taking the pope to The Hague 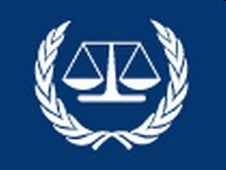 Sex victims of the JP2 Army John Paul II Pedophile Priests Army are taking the Pope to the highest Justice court at The Hague court because Benedict XVI was Cardinal Joseph Ratzinger who was the right hand man and partner-in-crime of John Paul II. These are Catholic children who were sodomized by "Holy" Catholic priests -- but kneeling down or praying the Rosary or receiving the Eucharist are not magic that can make these heinous crimes will disappear in their memory. Their lives are "living Hell" as a consequence of their pedophiliac experiences from Harry Potter priests who claim that they can re-incarnate Jesus Christ in the sorcery of the Eucharist.

Read why the Eucharist is pure sorcery and magic by powerless priests who cannot reincarnate dead cats or dead dogs http://stella0maris.blogspot.com/2010/01/magisterium-benedict-versus-holy-mary.html

Read our latest article on the Feast of the Holy Rosary --

The Rosary could not defeat JP2 Army John Paul II Pedophile Priests Army in the 20th Century ... unlike the Battle of Lepanto in the 16th Century http://jp2m.blogspot.com/2011/10/rosary-could-not-defeat-jp2-army-john_06.html 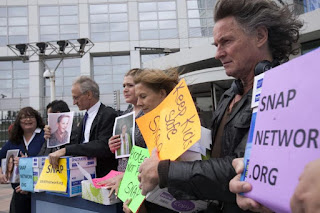 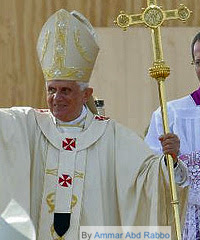 Benedict XVI with his Emperor's clothes pompous costume was a cold-blooded and heartless Cardinal Joseph Ratzinger who did and said nothing to stop the JP2 Army, read more about Benedict XVI here http://pope-ratz.blogspot.com/


Why we’re taking the pope to The Hague

As someone who was molested as a child by a trusted parish priest, I’ve had to wait a long time for any real opportunity to see justice done.

But I’m waiting no longer.

On Sept. 13, members of my organization, Survivors Network of those Abused by Priests (SNAP), joined by our attorneys from the Center for Constitutional Rights, filed an 84-page complaint with the International Criminal Court, detailing how Vatican officials tolerate and enable the systematic and widespread concealing of rape and child sex crimes.

Our filing, according to The New York Times, represents “the most substantive effort yet to hold the pope and the Vatican accountable in an international court for sexual abuse by priests.”

This action could mark the first time that an international court asserts jurisdiction over the Vatican for crimes committed by its representatives worldwide.

For decades, most of us who were sexually assaulted by clerics suffered in silence. We rarely spoke up and had few options when we did.

We first approached, and were usually rejected by, church officials. We were similarly rebuffed by police and prosecutors who had little interest in taking on a powerful, centuries-old institution that operates without democratic accountability.

Nonetheless, those of us with the strength to come forward eventually sought out attorneys, hoping to use the U.S. civil justice system to at least publicly expose our predators. Most of us learned that the rigid, archaic, predator-friendly statutes of limitations prevented us from bringing — much less winning — a lawsuit.

And so the crimes continued.

Undaunted, we explained our plight to state lawmakers. While initially sympathetic, they almost always ultimately capitulated to the well-oiled lobbyists of bishops and insurance companies and wouldn’t pass legislation that might let us have our day in court.

So we called reporters, wrote editors, and even held lonely news conferences where no one came.

Finally, after many years of effort in the United States and around the world, the problem became too big to ignore.

We finally began to feel heard.

And now we want these crimes investigated and prosecuted.

Some may be shocked that we are accusing the world leader of a church — a man considered by many people of faith to be a holy leader. But one cannot be the head of an institution and escape accountability for that institution’s continuing criminal cover-ups.

In the words of Ireland’s Prime Minister Enda Kenny, who spoke out this summer after encountering the Vatican’s obstruction in his country’s efforts to investigate clergy sexual violence, “The rape and torture of children were downplayed, or ‘managed,’ to uphold instead the primacy of the institution — its power, its standing and its reputation.”

In The Hague, in Rome, here in the United States and around the world, the time has come for a reckoning.

Our case before the International Criminal Court sends a message to the Vatican that these crimes cannot – and must not — continue.

David Clohessy of St. Louis is the director of SNAP, the Survivors Network of those Abused by Priests  (SNAPnetwork.org). He can be reached at pmproj@progressive.org.

Read our related articles in our blogs the John Paul II Millstone
The 9/11 Decade and the JP2 Millstone 9th anniversary of Paris Arrow's vision of the death of John Paul II at the World Youth Day http://jp2m.blogspot.com/2011/09/911-decade-and-jp2-millstones-9th.html

Benedict XVI known worldwide for his Crimes Against Humanity at The Hague. From the Voice of Russia to the Times of India... http://pope-ratz.blogspot.com
/2011/09/benedict-xvi-known-worldwide-for-his.html

The Sorcery and Magic of the Eucharist http://stella0maris.blogspot.com/2010/01/magisterium-benedict-versus-holy-mary.html

It was only after two decades of frustration battling the Catholic Church on behalf of victims of clerical sexual abuse, Barbara Blaine said, that she and SNAP decided to take their case to "a court of last resort": the International Criminal Court in the Hague, Netherlands.

Ms. Blaine, a Toledo native and lawyer who is founder and president of the Survivors Network of those Abused by Priests, explained the reasoning behind the filing in a panel discussion Monday at the University of Toledo College of Law.

Ultimately, the filing's goals are to prevent more children from being sexually abused by priests and to encourage victims of abuse to step forward and be counted, Ms. Blaine said. After SNAP filed with the court in September, more than 600 people from 65 nations have contacted the victims-advocacy group saying they were abused by priests, she said.


SNAP amends complaint filed with Hague court
UNITED STATES
Toledo Blade
BLADE STAFF
— An advocacy group for victims of clerical sexual abuse has filed supplemental documents with the International Criminal Court in in support of its claim that officials and bishops deliberately covered up for priests who molested children.
The Survivors Network of those Abused by Priests said the new allegations arose after nearly 500 victims, witnesses, and whistleblowers from 65 countries contacted the organization after it filed the complaint with the court in September.
In addition to the new documentation, attorneys from the Center for Constitutional Rights, which is representing SNAP, told the court prosecutor that it believes Catholic leaders in the United States were making orchestrated legal efforts to retaliate against SNAP for filing the complaint.
Posted by Paris Arrow at Wednesday, October 05, 2011