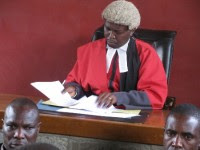 Parents of a 25-year-old woman who claim their daughter has been confined illegally by a secretive Catholic Church movement, Opus Dei, have sought the court’s intervention to have their child back. The court has ordered the Commissioner of Police and the Director of Public Prosecutions to produce Sophie Naliaka Kibanani in court next Friday.

The immigration Department had also been compelled by High Court Judge Daniel Musinga to prohibit the agents who recruited Naliaka and any other servants of Opus Dei from removing her out of Kenya. The parents in a suit instituted yesterday at the High Court in Nairobi allege that their daughter was lured from their home in Bungoma 21 days ago and taken to Nairobi to serve the Opus Dei as a numerary living in one of its residences.

The girl studied Commerce at the University of Strathmore but the parents claim she graduated in absentia during the graduation ceremony on June 24.

Numeraries are celibate members of Opus Dei who usually live in special centres run by Opus Dei. Both men and women may become numeraries, although the centres are strictly gender-segregated. Numeraries generally have careers and devote the bulk of their income to the organisation

Dr Charles Ngome and his wife Hellen Kibanani allege that their daughter, Sophie Naliaka might be taken out of the country so that she can continue serving as a member of Opus Dei . It is claimed that her membership into the organization demands that she serves it permanently and for life in one of its residences in Kenya or anywhere in the world, according to the parents.

The parents said Naliaka has been suffering from a mental disorder apparently caused by her recruitment to the church movement
Through their lawyer Kibe Mungai the parents allege that as a result of the mental illness Naliaka was admitted to Mathari mental hospital in Nairobi and treated for delusional disorder on May 9.
She was discharged on May 24 2011 and placed on medication as outpatient. As her recovery improved, members and agents of Opus Dei , lured her on June 18 from her parent’s home in Bungoma .

The agents identified as Maria Consolata Osienju, Otero Espanola alias Maria and Irene Ngunjiri alia Renee facilitated her travel to Nairobi for admission in Fanusi house as a Numerary.
Naliaka had been recruited into Opus Dei when she was studying at Kenya High School without the consent of her parents.
And when she was admitted for undergraduate studies at Strathmore University, she continued with her involvement with Opus Dei.
Her parents tried unsuccessfully to have the intervention of the Vice Chancellor of Strathmore University to rescue Naliaka from Opus Dei in a written letter dated June 18.

Soon after the letter was delivered, the mother claims Naliaka called her and told her in a timid voice that she had recovered. She also informed her that after graduation she will continue living in Fanusi House as she searched for work and hanged up. The parents want the court to order the Commissioner of Police, and the director of Public Prosecutions to produce Naliaka in court within 36 hours of the order being issued.

Justice Musinga directed lawyer Mungai to serve Strathmore Education Trust, the director Fanusi Study centre and Keri house who have been named as respondents in the case. The case will come up for hearing next Friday.