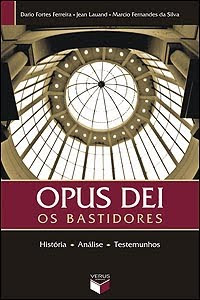 
As the kind courtesy of OhmyNews and Ms. Ana María Brambilla, The M+G+R Foundation brings to its readers a very well written and balanced review of the latest book about The Prelature of the Holy Cross and Opus Dei - "Opus Dei - Os Bastidores" ("Opus Dei - Behind the Scenes") just published in Brazil and destined for many Tope Sellers Lists across the Portuguese speaking communities across the world.

A dangerous game of faith and brainwashing starts with a remarkable pseudo-scientific initiation. Teens invited to study groups in cultural centers are welcomed by famous professors from universities that these boys and girls aspire to enter.

But little by little science takes a back seat to religion. A group of teens is invited to a retreat to hear a lecture by a priest. In his speech the priest will talk about his vocation:

# Why not devote yourself to God's truth -- now?
# If you can see your way clearly, follow it. Why don't you dismiss the cowardice that holds you back?
# "Go and preach the Gospel... I'll be with you." Who said that? - it was Jesus Christ, and He said it to YOU!
# God's Kingdom will never end! Wouldn't you be happy to work for a kingdom like this?

The impressionable boy listening to this lecture probably has never thought about entering a religious order. Maybe, he just wanted to get married, have children, and live a life as a good Catholic.

But at a time in his life when he is full of fears and uncertainties, when his personality is still being formed, he now receives a "Call from God." His life, henceforth, will be a happy thing, because he will sanctify his existence now and in the afterlife.

In a nutshell, this is the appeal used by Opus Dei members to get new recruits to live the "Work of God." This is the starting point of the book "Opus Dei -- Os Bastidores" written by three ex-members of this Vatican-supported religious organization.

Dario Fortes Ferreira, Jean Lauand, and Marcio Fernandes da Silva have compiled several months of depositions from people who infiltrated Opus Dei operations around the world, especially in Brazil, where this ecclesiastical group of the Catholic Church is at work in twenty states. Today, more than two hundred ex-members have kept in touch with the authors about their pains and psychological problems. The authors also reproduce their own memories as members. The result is a 230-page work published in Portuguese last October that is attracting media attention all over the world.

For two weeks this was No. 8 on Brazil's bestseller list, and the title is among the top 10 sellers in big bookstores in various capitals. The authors are already entertaining ideas about making a movie of the book. Twenty thousand have been sold already, a significant number for the Brazilian market. Lauand told OhmyNews International that publishers in South Korea, Portugal, Spain, Lithuania, Croatia and Thailand, among others, have shown some interest in bringing out the book.

Dan Brown's popular, "The Da Vinci Code," sensationalizes Opus Dei, as opposed to the authors of "Opus Dei - Os Bastidores." Disciplining by self-flagellation and the use of a belt made from cilice to mortify the flesh, although substantiated, is not the most serious problem caused by Opus Dei in the lives of its members.

Sustained in a free-for-all power struggle within the Catholic Church and society at large, Opus Dei has become an end in itself. The duty of members is to raise funds for food, to pay center accounts and other expenditures as appointed by the directors, and to keep other members under surveillance. Members must work to convince other teenagers to become Opus Dei members too and lead 'study groups' that serve as a front.

When a man or a woman becomes an Opus Dei member he/she must immediately make a vow of chastity and poverty forevermore. Any questioning of this vocation "will be punished with an eternity in hell," according to one Opus Dei harangue.

The initiate will not become a priest or nun, but will study and work according to a very strict schedule laid down by the directors of the center where he/she will live, handing over all earnings to the Order. Even checks must be signed over to the center's directors.

They must renounce their blood relations to enter the "supernatural" family, meaning those who live in a center. They can watch TV only once a week, and then only news programs censored beforehand. The newspapers and magazines they read arrive in their hands having been censored. Some photos may be censored as "sensual," and ideological articles critical of the Order are off-limits as well. Movies are edited. They can't surf alone on the Internet. If some member opens a browser, he/she must type only the URL he/she wants to visit, and another member must see the content on the screen.

They can't buy or read any book without asking the center's director for permission. When the Catholic Church abolished the Index Librorium Prohibitorum, which was imposed in the Middle Ages, Opus Dei instituted its own Index, blacklisting authors like Jose Saramago, James Joyce, Umberto Eco, Machado de Assis and 99 percent of philosophers since Rene Descartes, such as Kant, Heidegger, Hegel, etc.

The classification of these books can vary from level one -- unrestricted, to level six -- morally forbidden. This way of classifying books was inherited from the dictatorship of Francisco Franco in Spain. (Opus Dei was created during the same "franquismo" period in Spain by a priest, Josemaria Escriva, on Oct. 2, 1928). Today the Order has 84,000 members in 61 countries.

Subjected to a daily routine of hours of prayer, ice-cold showers, trying to sleep on a hard wooden board once a week, selling the Opus Dei publication called "Quadrante" in Brazil, putting in a lot of work at the prelacy centers and a total negation of one's own desires and personal needs, members present many kinds of disorders: depressive, gastro-intestinal, etc., relating to deep physical and mental exhaustion. Doctors attached to the centers -- Opus Dei members themselves -- prescribe medications, some very inappropriate. Often, when a member decides to leave the prelacy, he/she will suffer mental and emotional upheavals, e.g., personality disorders and affective instability; and his/her financial condition will be seriously compromised.

On page 45, a deposition from an ex-member reveals: "I know many unhappy and disturbed women who still remain in Opus Dei, giving everything to this organization. I personally witnessed self-mutilation by some of these people, and I still can hear their stifled cries during the night. The oppression and upheavals at mealtimes were routine. Some auxiliary members, for physical reasons, could not work any longer, and had been banished, without explanation, money or any place to go."

Considering the exceptional success of "Opus Dei: Os Bastidores" and the large amount of mail received by the authors, one of them, Jean Lauand, created a "Frequent Asked Questions" website about the book. On this site he comments on the difficulty involved in deciding to leave the Order and abandon the prelacy. Lauand cites an interview given by the global "big-boss," Javier Echevarria, on the Order's official Web site. Someone asked him:

"Is there is some pressure against a person who wants to leave Opus Dei?"

In fact, when a member decides to leave Opus Dei he/she suffers more ideological pressure. His/her behavior is compared to that of a traitor, who will be completely unhappy in this life and for all eternity. Even the little things, e.g., drinking a glass of water, will be something as bitter as poison. Lauand also asks how an ex-member can start a life over again at 30, 40 or 50 years of age with no money and few friends -- even the network of friends is controlled by Opus Dei.

The idea of writing a book like this started when the authors, working on a Web site for ex-members, perceived that society needed to be informed about what happens inside Opus Dei. Maybe, apparent approval by the Catholic Church was granted because the Vatican is not aware of the barbarity that happens in the centers.

Another goal of this book is to help these ex-members restart their lives, encouraging them into thinking about abandoning the prelacy and showing them that life as a normal person is not bitter as poison.

The last pages of the book are dedicated to initiating legal measures to alert the Catholic Church about the Order's real activities and to bring to justice an organization that has been destroying many lives around the world.

After this book was published, the first about Opus Dei by Brazilian authors, a member's mother, Elisabeth Castejon Lattaro Silberstein, wrote "Opus Dei? The false God's workmanship: An alert to the Catholic Family," which was set for release on Dec. 12 in Sao Paulo, Brazil.
#


You can find more information about Opus Dei ex-members here: 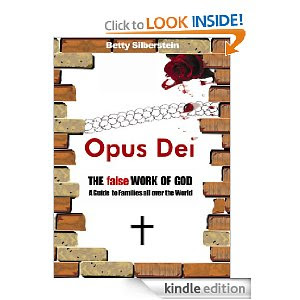