Here is a very current proof on how Opus Dei subtly control Wall Street:a former Swiss Guard Army is giving a seminar in Boston on Thursday, November 03, 2011 7:30 - 8:45AM on "Globalization means bringing down trade barriers" = The Pope and the CEO
Where: Putnam Investments, One Post Office Square, 2cnd Floor
Cost: $10 With Contintental Breakfast
Read more details below

The seminar will be based mainly on the Vatican Trinity: from documents of the Second Vatican Council, the writings of Pope John Paul II and St. Josemaria Escriva, the Founder of Opus Dei!!

The 3 basis of the seminar prove the Vatican Trinity that we have been saying all along. These kinds of seminars is how Opus Dei recuirt members and make propaganda of their WORLD DOMINATION AGENDA. Opus Dei want to control the world so that money will keep pouring into the Vatican Bank -- and through their feel-good theology, they can continue to manipulate people and blind them from the truth about the Vatican Swiss Banks that hoard despots' ill-gotten wealth, hence Opus Dei perpetuate poor countries and poor peoples.

The Opus Dei's founder, St. Josemaria Escriva was the spiritual adviser to the most notorious mass murderers in history, General Pinochet of Chile and General Franco of Spain, read our related articles on Opus Dei at the John Paul II Millstone http://jp2m.blogspot.com/2011/04/john-paul-ii-patron-of-pederasts-and.html

“Globalization” is eagerly embraced by those seeking new markets, greeted with much disdain by those hoping to preserve a US manufacturing base, and attracts both acclaim and criticism within both major political parties. But more importantly, globalization promises far-reaching change to society as a whole.

The Pope and the CEO 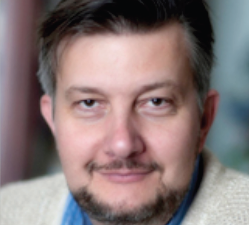 Former Swiss Guard and successful businessman Andreas Widmer thinks so — and has laid out his reasons in a practical and fascinating new book: The Pope and the CEO: John Paul II's Leadership Lessons to a Young Swiss Guard. In it, Widmer takes the reader through nine practical lessons. He stresses that business and faith go together and that business can be a wonderful school of virtue and faith. In his address to the Leadership Forum, Andreas will share some of the anecdotes from his book and impart some practical advice from working with teams and building your career to living a balanced life and incorporating faith and prayer into our daily tasks.

The Leadership Forum was established nine years ago by a group of downtown Boston professionals as a way to encourage men to live unity of life, integrating their faith into their professional, family and social lives.

The Leadership Forum takes its inspiration from the documents of the Second Vatican Council and from the writings of Popes Benedict XVI and John Paul II and of St. Josemaria Escriva, the Founder of Opus Dei. This talk is the third of the Leadership Forum’s ninth season. To learn more, please visit our website:

Andreas Widmer is the cofounder of SEVEN Fund, a philanthropic organization run by entrepreneurs who invest in original research, books, films, and websites to further enterprise solutions to poverty.

Andreas served as a Pontifical Swiss Guard from 1986-1988, protecting Pope John Paul II. He holds two business degrees from Switzerland, plus a B.S. in International Business from Merrimack College and an M.A. in Ministry from St. John’s Seminary in Boston.

Andreas is a seasoned business executive. He was an executive in residence at Highland Capital Partners, a venture capital firm. He served as CEO of OTF Group and helped lead Eprise Corporation, Dragon Systems and FTP Software. Widmer has worked extensively in the United States, Europe, Asia, Africa and Latin America, and has brought more than 100 leading-edge technology products to market.
Details

About the Leadership Forum

The Leadership Forum was established eight years ago by a group of downtown Boston professionals as a way to encourage men to live unity of life, integrating their faith into their professional, family and social lives.

The Leadership Forum takes its inspiration from documents of the Second Vatican Council, the writings of Pope John Paul II and St. Josemaria Escriva, the Founder of Opus Dei. This talk is the second of the Leadership Forum's eighth season.

The 4 cornerstones of the Vatican: Narcissism, dysfunction, disconnection, elitism http://popecrimes.blogspot.com/2011/09/nazi-gold-and-vatican-how-rome-saved.html


Read our related article The Nazis of Hitler and the Roman Catholic Church of Benedict XVI are similar: They both burn human beings in Auschwitz and in Hell http://pope-ratz.blogspot.com/2011/02/nazis-of-hitler-and-roman-catholic.html

Pope John Paul II has called the Rosary his "favorite prayer," after the Mass and the Liturgy of the Hours. In fact he added more mysteries, the Luminous Mysteries on October 16, 2002, on his 25th anniversary as Pope, a few months after priest pedophilia erupted in Boston because Cardinal Bernard Law aided and abetted the JP2 Army of Boston.

What use are those "Mysteries of Light" when all that John Paul II did was hide in darkness his own JP2 Army John Paul II Pedophile Priests Army named aptly after him who had 27 years to do and say something to stop it but instead he glorified Cardinal Bernard Law and Fr. Marcial Maciel, his two Achilles Heels??