Today marks the 10th anniversary when Boston Globe first published the priest pedophilia phenomenon in the United States of America. Cardinal Bernard Law of Boston was the star Archbishop of Boston who publicly admitted to aiding and abetting 80 pedophile priests transferring them from one parish to another. His own Bostonian priests and the laity forced him to resign in disgraced but John Paul II elevated him as the Archpriest of the ‘mother of all basilicas’ in Rome, the St. Mary Major. Ironically, it was in this basilica where the famous Battle of Lepanto was won because a pope prayed there from dawn till dusk. Obviously, the Rosary of John Paul II could not defeat the JP2 Army – John Paul II Pedophile Priests Army, named aptly after him because he had the longest papacy and he did absolutely nothing to protect and defend children, read our related article http://jp2m.blogspot.com/2011/10/rosary-could-not-defeat-jp2-army-john_06.html The greatest mystery in the Catholic Church today are not the Mysteries of the Rosary but rather the speedy sainthood of John Paul II and the perpetual cardinalship of Berbard Law both who covered-up pedophile priests during their lifetime, read our related article Heil Satanas JP2 Patron Saint of Pedophiles, Pederasts Rapists-Priests! John Paul II is the same yesterday and today-- he cannot protect children http://jp2m.blogspot.com/2011/05/heil-satanas-jp2-patron-saint-of.html.

John Paul II was already preparing for his (last) World Youth Day trip to North America in Toronto in July 2002 and he chose not to mention anything about priest pedophiles and his callous heart showed neither compassion nor compunction to the thousands of American children who were victims of this most heinous crime against children in the latter half of the 20th century. In life, John Paul II did not defend children, the most vulnerable, against his JP2 Priests generation, hence in death, he cannot defend them either. This beatification of John Paul II is the worst pathological lie of Benedict XVI and the Opus Dei and John Paul II is the biggest Golden Cow of the Opus Dei. The vision of Paris Arrow of St. Michael the Archangel tying the biggest millstone around the neck of John Paul II in that WYD stand true today – because he was unrepentant until his death in April 2, 2005, read our related article here The 9/11 Decade and the JP2 Millstone 9th anniversary of Paris Arrow's vision of the death of John Paul II at the World Youth Day http://jp2m.blogspot.com/2011/09/911-decade-and-jp2-millstones-9th.html

So why Cardinal Bernard Law still a Cardinal after he committed such heinous crimes against Bostonians? Why would such a pure Jesus Christ want to be cloned in his evil hands everyday, read our related articles OC Diocese buys Crystal Cathedral as flesh-factory of Christ... for wealthy God-flesh-eating Catholics http://popecrimes.blogspot.com/2011/11/oc-diocese-buys-crystal-cathedral-as.html

Opus Dei control the Vatican Bank and multinational corporations that control the world's finances... with Knights of Malta. VIDEOS of Vatican Evils 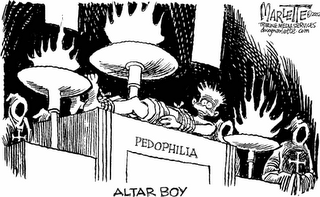 BOSTON — Dozens of clergy sex abuse victims are gathering in Boston this weekend to mark a decade since the abuse crisis broke and devastated Catholics and their church nationwide.

The conference coincides with the 10th anniversary of the Jan. 6, 2002, publication of a Boston Globe article that prompted a stream of revelations about abusive priests and church leaders who failed to stop them, instead moving them between parishes.

About two-thirds of the 120 people signed up to attend the conference are clergy sex abuse victims, said Eva Montibello of the Massachusetts Citizens for Children, an abuse prevention group that helped plan the event.

The conference aims to prevent child sex abuse and increase its exposure, with steps such as encouraging victims to go public with their stories — including the painful details. The last 10 years has shown that can lead to revelations from other victims, Montibello said.

"It's important to mark the change that has occurred," Costello said. "In the history of the church, which moves millennium per millennium, 10 years is lightning speed. And survivors did that. Supporters did that."

The conference, called the "10th anniversary Celebration & Conference: Confronting the Crimes & Cover-up of Sexual Abuse by the Boston Clergy," runs from Friday night through Sunday at a Boston hotel. Events include media and legal panels, talks on making the church more accountable and a play, "For Pete's Sake," written by and starring the victim of a pedophile priest.

On Sunday, participants will demonstrate at the Cathedral of the Holy Cross, the mother church of the Boston Archdiocese, continuing the regular protests there since the scandal broke.

Prominent clergy sex abuse victims' attorney Mitchell Garabedian, a speaker on the conference's legal panel, said the meeting will keep pressure on the Boston Archdiocese to do more.

The church has enacted various reforms in the last decade, but Garabedian said they largely amount to hollow gestures.

Clergy sex abuse advocates say too few church leaders and abusers have been held criminally accountable, and they're pushing for changes in statute of limitations laws. Such laws can prevent prosecutions if the alleged abuse was too far in the past.

Advocates also say a list of 159 accused priests, released this year by the Boston Archdiocese, left off dozens of clerics.

In five pages of reflections on the crisis, released this week, Boston Cardinal Sean O'Malley said the crisis will never really end and the church must continually seek forgiveness.

But he also pointed to progress, including settling 800 claims of abuse, training 300,000 children and 175,000 adults to spot and prevent abuse and $7 million spent to provide counseling and medication for victims.

Catholic League president Bill Donohue said Thursday that the church has a better record than any other institution fighting child sex abuse, but some victims won't ever be satisfied.

In a release headlined "Boston Victims Bask in Misery," Donahue said, "It's time for some straight talk: these people don't want to move on, and that's because they have too much invested in maintaining their victim status."

Costello, 50, said he was raped for years as a child by Rev. John Cotter, who he said would digitally penetrate him in the shallow end of a swimming pool under the guise of teaching him to swim. That left him in such pain, he couldn't sit on bus rides home from the pool, he said.

Abuse victims don't want to bask in the past — they wish it never happened, and it's often led to personal, financial and drug problems, he said. But the conference can recognize that many people have been able to come forward and start dealing with their pain in the last decade, while also bringing change to the church.

"We forced them to take a look at it. And it went global," Costello said. "We need to celebrate that."

Ten years ago Friday the Boston Globe published the first in a series of reports on a shocking pattern of clergy sexual abuse within the Catholic Church. That first story revealed how then-Boston Cardinal Bernard Law repeatedly transferred the Rev. John Geoghan from parish to parish, despite numerous reports of sexual abuse by Geoghan.

We mark the sad anniversary with Boston Globe columnist James Carroll. As a former priest, Carroll has written about the crisis with singular passion and clarity.

The Archdiocese of Boston has settled approximately 800 clergy sexual abuse claims, is providing care to about 300 abuse survivors at any given time, and has given anti-abuse training to nearly half a million children and adults, Cardinal Sean O’Malley said in a report issued today outlining the church’s response in the wake of the scandal that first broke 10 years ago this month.

“Nothing has been done but whatever the court has made them do,” McDaid said.

O’Malley also said in his report that the church had strengthened its training standards for priests and made the candidate screening process “the strongest possible, with particular attention to any issues related to child safety.” The church conducts more than 60,000 criminal background checks a year on priests, teachers, volunteers, and other people working with children, according to the report, “Ten Years Later – Reflections on the Sexual Abuse Crisis in the Archdiocese of Boston.” ...

The clergy sex abuse scandal first broke on Jan. 6, 2002, when a Globe article disclosed how O’Malley’s predecessor as cardinal, Bernard F. Law, had repeatedly transferred a priest from parish to parish as reports of sexual abuse arose. The scandal sparked a flood of lawsuits and investigations, spreading across the nation and then worldwide, rocking the Catholic church.

Click here to read a Globe interview with O’Malley in which he said the scandal has changed the church for all time.

Brian MacQuarrie can be reached at macquarrie@globe.com.