Crystal Cathedral must not be sold to the Orange County Catholic Diocese because Catholic bashers and foremost Vatican Pied Pipers like George Weigel will denigrate Dr. Robert Schuller and mock him till the end of time just like Martin Luther and Protestantism are still being ridiculed by Roman Catholics today. These Vatican Pied Pipers will claim that Protestants do not last but the papacy and Catholicism do. Please Crystal Cathedral, do not be a victim of the Vatican Evil Empire.

All the positive Hour of Powers that Dr. Schuller have preached during his lifetime will become dust in history and will be replaced by Catholic arrogance and Catholic sorcery of the Eucharist, read our related article Magisterium Benedict VERSUS Holy Mary: Priests' transubstantiation instant reincarnation of Christ VERSUS Mary’s 9 months pregnancy& child birth http://stella0maris.blogspot.com/2010/01/magisterium-benedict-versus-holy-mary.html

Dr. Robert Schuller will be made to appear as if he kowtowed to the papacy and to Catholic Supremacy read our related article John Allen promotes monarchy of Catholicism. As Vatican Pied Piper he announces ‘Meet the new Crown Prince of Catholicism’ http://popecrimes.blogspot.com/2011/07/john-allen-promotes-monarchy-of.html

Dr. Robert Schuller wrote many excellent positive faith-based books and he walked the talk but the Roman Catholic Church has been plagued by priest pedophilia during the longest papacy of John Paul II and Cardinal Ratzinger now Pope Benedict XVI and there is no room for such evil Catholic priesthood to dwell at the Crystal Cathedral, read our related article 9/11 victims 3,000. JP2 Army 100,000s. May Day: both Hitler and bin Laden Announced Dead on May 1 on John Paul II Beatification Day B-Day http://jp2m.blogspot.com/2011/05/911-victims-5000-jp2-army-100000s-may.html

There is not one single pedophilia recorded at the Crystal Cathedral while there are hundreds of thousands of victims of the JP2 Army named aptly after John Paul II Pedophile Priests Army, see the statistics here http://jp2army.blogspot.com/

There was never the sorcery of the Body and Blood fo Christ at the Crystal Cethedral and let that memory last till the end of time -- because it is unlike John Paul II smelled Devil`s Bowels as roses for 27 years as he deified Father Marcial Maciel and deified Cardinal Bernard Law http://jp2m.blogspot.com/2011/04/john-paul-smelled-devils-bowels-as.html

It is better that the Crystal Cethedral be sold to a university campus where young people will be enlightened - and not deceived by the Vatican - or to another Protestant Church who will carry on the positive memory and good deeds of Dr. Robert Schuller. Do not let the corrupt Vatican take over Crystal Cathedral where they will expand their deceptions and crimes against humanity in California, read our related article Holy Heist! John Paul II WYD had no role with Arab youths who liberated Egypt from Mubarak who stole then deposited billions into Vatican Swiss Banks http://jp2m.blogspot.com/2011/02/holy-heist-john-paul-ii-wyd-had-no-role.html

Read about the evil eyes of Pope Benedict XVI http://pope-ratz.blogspot.com/2011/06/fr-murphy-in-evil-eyes-of-benedict-xvi.html

America & the World, wake up and see the Victims in USA - Attackers - Responsible Leaders

Opus Dei controlled the 27 years papacy of John Paul II and is therefore the foremost guilty party who aided and abetted and covered-up the John Paul II Pedophiles Rapists-Priests Army. Opus Dei wrote most of John Paul II’s books and writings and to ensure their perpetuity as “All things Catholic”, they want JP2 to be beatified and canonized now by Benedict XVI so as not to take any chances on other future popes. The FACE of Opus Dei is John Paul II and the PHANTOM Spirit of Opus Dei is their founder St. Josemaria Escriva, read our related article John Paul II, Patron of Pederasts and Opus Dei – analysis of Joaquin Navarro-Valls’ reasons for JP2 beatification at Opus Dei conference in Rome http://jp2m.blogspot.com/2011/04/narcissism-and-grandiosity-of-john-paul.html

Schuller's Crystal Cathedral may be reborn as Catholic

(This title is already insulting Dr. Schuller...as if he has converted to Catholicism. If CC is sold to OC Diocese, Catholics will have a field day and shred his reputation to pieces like they still do with Martin Luther and King Henry VIII)) 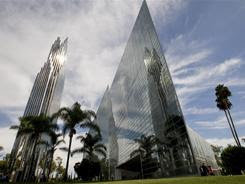 The Catholic Diocese of Orange has joined the bidding to purchase the bankrupt Crystal Cathedral in Garden Grove, Calif.

The Diocese of Orange said its proposal could pull the megachurch, which was founded more than 50 years ago by pioneering televangelist Rev. Robert H. Schuller, out of bankruptcy by the end of the year.

The Crystal Cathedral is trying to sell the property and lease back portions of it for use for services to help erase a $36 million mortgage and settle nearly $10 million in unsecured debt. The church has been plagued by financial troubles after a disastrous leadership transition and a devastating slump in donations.

The church is also mulling several other offers. A real estate investment firm offered $46 million, as did Chapman University, which is considering building a medical school on the sprawling campus. A Norco-based church, My Father's House Church International, also made a $50 million offer for the property, which includes the famous glass-spired church designed by architect Philip Johnson.

The diocese, which is looking for a less expensive alternative to building a new cathedral for its 1.2 million parishioners, said its proposal would allow the Crystal Cathedral to lease portions of the property for three years at below market rates.

At the end of the lease, the ministry would have to find a new location with the help of the diocese.

Copyright 2011 The Associated Press. All rights reserved. This material may not be published, broadcast, rewritten or redistributed.

Chapman University in Orange has made a $46-million bid to purchase Crystal Cathedral Ministries' 35-acre campus in Garden Grove.

The ministry filed for Chapter 11 bankruptcy last year and has seen tumult among its governing board since then. It recently said Rev. Robert Schuller, its founder, would retain a seat on the board as chairman emeritus with no voting power.

Schuller's daugther, Sheila Schuller Coleman, is executive director of the ministry and has been at odds with some board and family members in recent months.

The bid submitted by Chapman matches one from Newport Beach-based real estate developer and owner Greenlaw Partners in April.

The ministry has proposed a reorganization plan that would use cash from the proposed $46 million sale to repay a $33 million bank loan and some other creditors over a two-year period.

Crystal Cathedral was built by television evangelist Robert Schuller and is known for its television show “The Hour of Power” that broadcasts from its iconic glass church.

The property is within a few miles from Chapman University and includes seven buildings with more than 329,000 square feet of space, according to university officials.

The proposal would allow Crystal Cathedral to lease back the church and other property on the campus. The church would also have a chance to buy back the property during the first four years of the lease.

Crystal Cathedral Ministries, considered by many to be the country’s first modern megachurch, listed assets and debts of $50 to $100 million when it filed for bankruptcy protection in October.

The church estimates its congregation has some 10,000 members.

Ministry officials cited the economy and dwindling contributions as the reasons behind the filing in U.S. Bankruptcy Court in Santa Ana.

SANTA ANA — A federal bankruptcy judge Wednesday approved a plan that outlines the sale of the debt-ridden Crystal Cathedral mega-church in Garden Grove.

Unless Crystal Cathedral members can pull off their "Miracle of Faith'' and raise the $50 million they owe creditors, then it appears the property likely will be sold to the Orange County Roman Catholic Diocese or Chapman University in Orange, because their bids promise the highest amount of cash.

U.S. District Judge Robert Kwan approved the plan proposed by the creditors' committee that envisions the sale of the church's property unless Crystal Cathedral members can pull off their fundraising drive.

The committee will send out copies of the plan to about 400 creditors by Sept. 24. The creditors, some of whom can vote on the plan, have until Oct. 24 to send in their ballots.

The process of counting up the votes is complicated because some creditors have more votes than others, and some of the votes carry more weight than others.

On Halloween, Kwan will hold a hearing to designate the property's buyer, which Crystal Cathedral Ministry can select. On Nov. 14, a hearing will be held to finalize the transaction. That date amounts to a deadline for Crystal Cathedral members to head off the sale.

If some of the so-called insiders — creditors that include Crystal Cathedral officials — object to the sale, then they could open themselves up to being sued by the creditors' committee.

The Diocese of Orange is offering to pay $53.6 million for the property. Crystal Cathedral Ministries would be allowed to rent at least 50,000 square feet on the campus for up to 15 years, with rent equal to 90 percent of fair market value. The lease option also carries a right to purchase the space at 90 percent of fair market value during the first five years of the lease.

The Diocese wants to build a new cathedral on the property.

Chapman University boosted its $47 million bid to $50 million and plans to use half the property to expand while allowing Crystal Cathedral four years to buy back half of the campus in a lease deal.

Another player could be arts and crafts retailer Hobby Lobby, which is offering to pay $47.5 million for the property, which would be leased to Kings College for a dollar, which would then lease the property back to the ministry, according to attorney Marc Winthrop, who represents the mega-church in the bankruptcy case.

Crystal Cathedral leaders have not expressed a preference as far as buyers, Winthrop said after today's hearing.

It's unclear how viable Crystal Cathedral's fundraising drive has been.

"The ministry remains hopeful they will raise the money,'' Winthrop told Kwan. "Progress has been made, but as I stand here today I can't tell you how much.''

Bob Canfield, a member of the church, told the judge that he is confident the elders of the ministry can raise the money in time, but only if some of Crystal Cathedral's leaders are ousted.

The Rev. Robert H. Schuller, who was in court today, founded the Crystal Cathedral in 1955, but it fell on hard times in 2008 when the economy collapsed. Canfield blamed in-fighting among Schuller's daughters, who have taken over as their father has retired.

Senior Pastor Sheila Schuller Coleman, the founder's daughter, is leading the fundraising drive and the church.

"We can raise the money if we can get rid of the girls, their husbands and their families,'' Canfield said, adding Schuller also needs to return to lead the church.

"We can do it if we can get rid of these people who are destroying our church,'' Canfield said.

Attorney Nanette Sanders, who represents the creditors' committee, told the judge the fundraising drive appears to be a longshot because donations are "worsening, not improving.''
Posted by Paris Arrow at Sunday, July 31, 2011