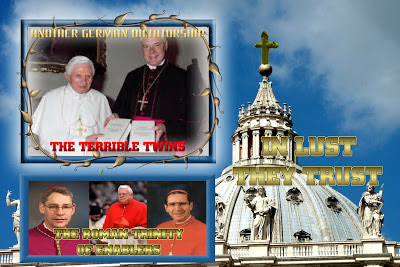 Updated January 29, 2013  See more images of Finn the Heretic below

Opus Dei Bishop Finn is a convicted criminal and he should be excommunicated immediately.  Bishop Finn is the shame and scandal of the Vatican Catholic Church in the USA and he is the evil Achilles Heel of Benedict XVI, his fellow criminal whose crimes against humanity are pending at The Hague read here http://popecrimes.blogspot.ca/2011/09/hague-is-asked-to-investigate-vatican.html.

The first thing a guilty despot does (to cling to power) is always to silence the free press, shut down newspapers publications and their offices (by using any alibi), and jail journalists who criticise his regime, and that is what convicted criminal Bishop Finn is now doing in his diocese in Kansas City, Missouri, as he attacks National Catholic Reporter by branding it as “not a Catholic” publication in an attempt to shut it down.  Bishop Finn refuses to resign as Bishop after being found guilty - but he struck a deal with the prosecutor to avoid trial and jail time, read more here ,GUILTY verdict! Bishop Finn must resign: A compilation. Bishop Finn is Finn-ished. Finnsanity... Insane KC STAR CAMPAIGN HITS by Catholic League fanatic Bill Donohue propagating Bishop Finn http://popecrimes.blogspot.ca/2011/11/bishop-finn-makes-devils-bowels-smell.html

Read about the journalists jailed by despots in the world under the watch of CPJ - Committee to Protect Journalists recently released the number of jailed journalists in the world here   Benedict XVI the Vatican Last Tsar: Final despotic acts.  Vatican jails worldwide locations http://popecrimes.blogspot.ca/2012/12/benedict-xvi-vatican-last-tsar-final.html  The Committee to Protect Journalists does not include the because the Catholic jails are invisible and much more subtle but they are even more severe.

We hope that the Committee to Protect Journalists  will soon include the Vatican among those countries who jail their jourmalists soon in the form of excommunication, silencing, and notification, especially on good preists who disagree on one or two issue like women ordination, homosexuality, etc, the list are here http://popecrimes.blogspot.ca/2012/12/benedict-xvi-vatican-last-tsar-final.html  .

The Vatican Catholic Church’s equivalence to physical jail is to “excommunicate, to silence, to condemn Catholics as ‘heretics’” just like the Vatican Inquisition did with Galileo, read more here
Vatican Terror on Galileo, priests and the poor, women and children http://popecrimes.blogspot.ca/2013/01/vatican-terrorism-on-galileo-women-and.html

The crimes of the are always subtle and its capabilities for evil are boundless as we can see today in its cover-up of thousands of pedophile priests and their victims in the alone are more than 100,000.   It took Amnesty years to figure out before they finally named the among guilty countries, read here - Amnesty International names Vatican in 2011 report on human rights violations - it's time the UN end the Vatican status as a "secular" state http://pope-ratz.blogspot.ca/2011/05/amnesty-international-names-vatican-in.html

The Vatican condoned and covered-up the rape of children, especially the sodomy of little boys for 50 years, over half a century, and today the Vatican condones the rape of women in poor countries and then forbids them to have an abortion of bastards of evil men.  Read about women dying because abortion are prohibited in the section Vatican Terror on women and children http://popecrimes.blogspot.ca/2013/01/vatican-terrorism-on-galileo-women-and.html

The Pope and the Vatican want to control the SEX life of people in order to play on their despotic powers and control the purses and bank account of people.

But people are no longer playing the sex-game and SEX-LEASH of the Pope  especially in the USA when Obama declared an open war on Benedict XVI when he mentioned the equal freedom of GAYS in his new Presidential Inauguration Address.  In Asia, the only Catholic country, the Philippines, its President and govenment have approved the free distribution of condoms and contraceptives.  One of the wealthiest Catholics, Melinda Gates is distributing billions of dollars worth of contraceptives especially to women in poor countries and Benedict XVI dare not excommunicate her -- or she'll make a big dent n the Vatican Bank, read more here http://popecrimes.blogspot.ca/2012/07/vatican-titanic-hit-by-melinda-gates.html

The Vatican support despots in order to maintain their Vatican Billions and therefore it perpetuates the poverty of Third World countries - that is why Benedict “silenced” (jailed)  Liberation Theology priests because they would have awakened the poor to claim their rights and Vatican Billions in those countries would have dissipated, read more here  Benedict silence Tony Flannery http://popecrimes.blogspot.ca/2012/04/hypocrite-benedict-silenced-outspoken.html

Christ said that it is better a millstone should be hung around the neck of those who cause a child to sin and Bishop Finn has caused many children to sin, therefore Finn’s neck has a millstone tied to it like  John Paul II’s neck, read here  http://jp2m.blogspot.ca/2011/05/heil-satanas-jp2-patron-saint-of.html

Catholics should smart-up and stop attending the Mass and receiving the fake-flesh of Christ under the criminal hands of criminal Bishop Finn.  Today, Christ is again being persecuted by Bishop Finn as he abuses Christ by using Him as his mask to camouflage his criminal status as a live criminal-Bishop, read our related article, Benedict XVI uses Hitler as mask before German Parliament.  Nazis and Vatican are "a band of robbers"  http://popecrimes.blogspot.ca/2011/09/benedict-xvi-uses-hitler-to-divert.html.

Bishop Finn is following the strategy of his “Holy Father” Benedict XVI as he desperately cling to power as the Last Tsar of the Vatican and he handpick and tries to silence and excommunicate a few old Irish priests and Jesuits, read about them here Benedict XVI the Vatican Last Tsar: Final despotic acts.  Catholic jails worldwide locations http://popecrimes.blogspot.ca/2012/12/benedict-xvi-vatican-last-tsar-final.html

One of the strategies of warfare is “the best defence is an offense” and so Opus Dei Bishop Finn is now attacking National Catholic Reporter and condemning it that it is not a “Catholic” publication, see news compilation below.  How can National Catholic Reporter not be a Catholic publication when first of all it is the ’s platform for its foremost Vatican Pied Piper John L. Allen Jr., and second, all that NCR mainly talks about are Catholic news and Catholic spirituality?  NCR discusses Catholicism in-depth.  NCR’s experts and writers are all Catholic priests and Catholic nuns and Catholic laity.  But because they do not belong to Opus Dei, they are being condemned.  Except for Opus Dei’s favorite mouthpiece and author John L. Allen Jr, read more about him here John L.Allen Jr.Pied Piper of John Paul II deceives Catholics with his essay Fast-Track Saint in Newsweek -- with lunacy & Satanic timeline http://jp2army.blogspot.com/2011/05/john-lallen-jrthe-pied-piper-of-john.html

Read the interview below this self aggrandizing propaganda link first

Read the entire interview  below about OD Jerome Lejeune and who really made the discovery that he took credit for....http://www.renewamerica.com/columns/engel/130306

"RE : I understand that you and Catholic pediatrician Dr. Jacques Coureur and other concerned French Catholics have prepared and filed letters and documents with the postulator for the cause of beatification of Dr. Lejeune at the Vatican, concerning the events surrounding your discovery of the cause of Down syndrome. Has the evidence you have submitted to the Congregation for the Saints been acknowledged yet?"

KANSAS CITY (MO)
JimmyCSays
“One does not become a university president without cultivating a close relationship with deniability.”

I had already been thinking how closely the Barchi-Pernetti situation mirrored the scandal surrounding Bishop Robert Finn last year. After it surfaced that the Rev. Shawn Ratigan had surreptitiously taken pornographic photos of elementary school girls at the parish where he was pastor in Kansas City, North, Finn attempted to shift the blame to Vicar General Robert Murphy, saying that he himself never saw the photos and that he relied on Murphy’s assessment that the photos were not pornographic.

In other words, Finn gave himself deniability.

That didn’t fly with a Jackson County Circuit Court judge, of course, who found Finn guilty of a misdemeanor charge of failing to report child abuse. Now, Finn, who is on probation for two years, stands as the most senior Catholic official convicted in the church’s long-running child sex-abuse scandal.

Nevertheless, Finn has refused to resign, even after ruining the reputation of the Kansas City-St. Joseph diocese. Like Barchi, he’d rather carry on tattooed with shame than bow out gracefully and allow his organization to start afresh with new leadership.


Bishop confirms National Catholic Reporter is not a 'Catholic' publication

Bishop Robert Finn of , has confirmed that the National Catholic Reporter should not advertise itself as a “Catholic” publication.

In a column appearing in his diocesan newspaper, Bishop Finn notes that he, as the bishop of the diocese in which the Reporter is located, has the duty to “call the media to fidelity.” He cites the Code of Canon Law, which (in #1369) calls for “a just penalty” for anyone who “excites hatred of or contempt for religion or the Church.”

The National Catholic Reporter, Bishop Finn remarks, has taken an editorial stance that puts the publication at odds with the Church, by “officially condemning Church teaching on the ordination of women, insistent undermining of Church teaching on artificial contraception and sexual morality in general, lionizing dissident theologies while rejecting established Magisterial teaching, and a litany of other issues.” He reveals that he has received numerous complaints about the Reporter’s editorial policies.


Bishop Finn: National Catholic Reporter should not call itself Catholic

January 25, 2013 (LifeSiteNews.com) - The National Catholic Reporter, a newspaper renowned for its “liberal” editorial stance on numerous doctrinal and moral issues, should not advertise itself as Catholic, according to Bishop Robert Finn of .

The headquarters of the Reporter (not to be confused with the National Catholic Register) are located in Bishop Finn’s diocese, putting the paper under his ecclesiastical authority.

“I have received letters and other complaints about NCR from the beginning of my time here,” (BALONEY) writes Bishop Finn in a new column published today in the diocesan newspaper. The column was published to coincide with the feast of St. Francis de Sales, considered the patron saint of journalists by the Catholic Church. (those Opus Dei SAINTS ARE PUPPETS.  Saints can do NOTHING for victims of powerful predators JP2 Army - John Paul II Pedophile Priests Army.  The Zeus statues of St. Joseph overlooked the College Notre Dame where Saint Brother Andre worked for 40 years.  Millions of candles are lit before St. Joseph in MOntreal but he can do NOTHING for children.  St. Joseph did NOTHING to help those hundreds of young students sodomized by HOLY Cross Congregation de Sainte Croix pedophile priests, read our related article

Vatican Billions: its history, sources, and assets today worldwide. BOYCOTT the Vatican Museum and boycott ALL donations to the Vatican Catholic Church Reign of Terror