Benedict XVI is smiling amidst the storm because he belongs and is at ease with the destructive Satan the father of lies, murder and theft for as Pope he leads the Vatican Bank that hoard despots' ill-gotten wealth like Egypt's Mubarak and Libya's Gadhafi hence he personally perpetuates poor countries and poor peoples. The US government says it will freeze the 1.2 billion assets of Gadhafi in the USA, and England says it will freeze his 1.3 billion assets but the Libyan people say he stole more than 70 billion in his 40 years regime, so where are the other 70 billion hidden, that's 2 billion dollars he stole per year -- all hidden safely in the SECRET Vatican Swiss Bank with the Pope and Opus Dei as CEO, read our related article Holy Heist! John Paul II WYD had no role with Arab youths who liberated Egypt from Mubarak who stole then deposited billions into Vatican Swiss Banks http://jp2m.blogspot.com/2011/02/holy-heist-john-paul-ii-wyd-had-no-role.html 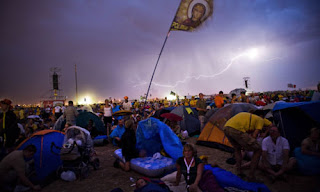 Lightning in Madrid is a sign of the lightning that will destroy the Vatican to the ground as predicted by the Third Secret of Fatima. In the next World Youth Day, God will not spare the Pope and the JP2 young Catholic worshipers adulating the false saint John Paul II Patron Saint of Pedophiles and Pederasts http://jp2m.blogspot.com/2011/04/john-paul-ii-patron-of-pederasts-and.html

A thunderstorm forced the pope to cut short his speech to an estimated 1 million young pilgrims gathered at a Madrid airfield to mark World Youth Day.

As rain soaked the crowd and lightning lit up the night sky on Saturday, the 84-year-old pontiff skipped the bulk of the speech and delivered brief greetings in half a dozen languages.

During the day, firefighters had sprayed the crowds with water, and pilgrims sought shade in the near 40C (104F) heat.

Some makeshift chapels on the field's perimeter were damaged in the downpour, forcing organisers to announce on Sunday that not everyone would be able to receive communion during mass. In fact, said Yago de la Cierva, head of the World Youth Day organising committee, almost none of the young people received the Eucharist.

Many pilgrims could not receive the sacrament of Holy Communion -- the blood and body of Christ for Roman Catholics -- because gusts of wind had damaged some temporary chapels, organisers said.

They instead accepted "spiritual communion" at the mass.

One of 17 tents holding the sacrament collapsed in the Saturday night tempest, injuring seven young people who were taken to hospital with light injuries including one broken leg. 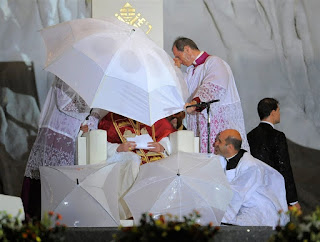 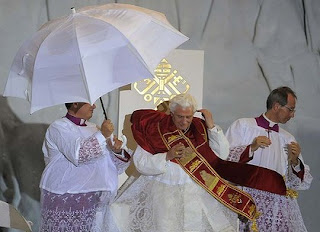 A VIOLENT storm forced Pope Benedict XVI to interrupt his speech at the weekend, sweeping off his skullcap, shaking the stage and drenching masses of pilgrims at a Madrid airbase.

As the heavens opened, an assistant tried to shelter the 84-year-old pontiff with a large white umbrella.

The Pope, his white hair blown into disarray, gripped a copy of his sodden speech, the pages and his vestments flapping in the wind. 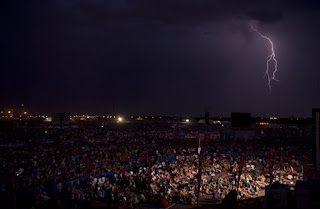