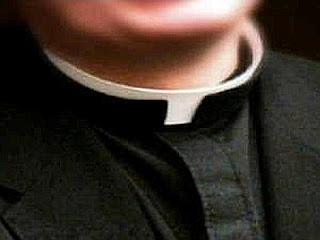 
The GAY priests in Italy hundreds of them, personify the GAY population of the "country" of the Vatican or Holy See which the United Nations must stop its status as a "nation" at the dawn of the 21st century. Benedict XVI condemns GAYS as "intrinsically evil persons" but he is GAY himself with his private secretary the handsome German Bishop Georg, read our related articles Benedict XVI and Georg his GAY Private Secretary are GAYS.!. http://pope-ratz.blogspot.com/2007/06/benedict-xvis-handsome-private.html

The Vatican is the worst liar on earth, the pope condemns Gays but is GAY himself and his deceits goes on and on because the Sorcery of the Eucharist blind the Catholics and the world from the truth, read our related blog Benedict XVI Ratzinger: God's Rottweiler http://pope-ratz.blogspot.com/

The pair asked the priests for up to 10,000 euros each to keep quiet about their virtual sex sessions via webcam and in some cases, actual encounters, Panorama said.

The weekly cited a judicial probe spearheaded by magistrates in the town of Isernia in Italy's southern Molise region, which led to the arrest on 26 July of 35-year-old Diego Maria Caoggiano and Giuseppe Trementino, aged 30.

The men live together in the town of Bagnoli del Trigno, where they have been granted house arrest, Panorama said.

Police found the contact details of over 100 priests on computers and mobile phones belonging to the suspects, as well as video recordings of sex sessions involving priests and incriminating messages in what prosecutors described as a "disturbing" case.

Trementino, a despatch rider, told Panorama through his lawyer that he had initially been seduced by a priest who he had delivered a parcel to and had sex with soon after they exchanged phone numbers. The priest had made regular payments to him via Postpay "often of his own free will" and had offered to buy him a car, Tremonti claimed.

The priest reported Trementino to police in May but he meanwhile met another priest on the social networking website Facebook. Trementino claimed to have spent three days with the priest in a hotel in Rome during a conference, and said the priest paid for his rail ticket and gave him 300 euros "to buy canabis, alcohol, condoms and lubricants".

"Asking them for money was a way of filtering the requests, which had got out of hand, he said, adding that he became "disgusted" by the priests' "absurd" and "asphixiating" needs.

Caggiano, who had access to Tremontino's computer and to his friends' social networking profiles, appears to have been the chief blackmailer, asking some priests for up to 10,000 euros, according to investigators.

One priest who paid out 7,000 euros to the pair said he had to use money given to him by parishioners for blessing their homes.

There are "a multitude of priests" in Italy who are keen for sexual contact via the Internet, where they exchange information on the casual partners they meet there, Isernia prosecutors said, cited by Panorama.

Confessions of an Ex-Priest: My Flirtation With the U.S. Conference of Catholic Bishops


On Friday, July 27, the U.S. Catholic hierarchy took another leap to the anti-LGBT right when the Vatican named Bishop Salvatore Cordileone the next Archbishop of San Francisco. Cordileone, who helped draft California's Proposition 8, is the chairman of the U.S. Conference of Catholic Bishops' Subcommittee for the Promotion and Defense of Marriage. At the press conference following his promotion's announcement, Cordileone restated his position that civil marriage is only the union of a man and a woman before saying, "I don't see how that's discriminatory against anyone." Such contradictory statements may sound absurd to outsiders, but to Catholic clerics, who are formed in a homophobic seminary system, they are a means of survival.

In November 2001, two months before the Boston Globe unmasked Cardinal Law's coverup of priest-perpetrated sexual abuse of children, I was in my final year of Catholic seminary. My brother seminarians and I stumbled through the predawn darkness and boarded a chartered bus. We were men in black (clerical attire) charged with a mission: Hobnob over breakfast with members of the United States Conference of Catholic Bishops, who were in Washington, D.C., for their annual meeting. Our goal: Get them to send more meat to our school, St. Mary's Seminary, known in conservative circles as the Pink Palace.

As the bus rolled to a stop in front of the bishops' hotel, my chest tightened. Openly gay Catholics wrapped in coats and scarves lined the dimly lit sidewalk. Candles flickered before their frozen faces as they maintained a silent, 24-hour protest of the Church's teachings on homosexuality. I rushed past them with the herd of soon-to-be-priests.

In the safety of the conference room, which smelled of coffee, dry cleaning, and musk, we waited for the guests of honor to arrive. We bitched about the ungodly hour and planned our ecclesial courting: "What's he looking for?" "He's into Opus Dei, so you stay away from him." "Thank goodness mine's a liberal." "Liberal with the altar boys!" "Is my collar straight?"

The number of men entering seminary had been dwindling for decades. Seminary rectors were desperate for devoted patrons. The lifeblood of every graduate-level seminary, bishops provided seminarians, each of us worth roughly $100,000 to $150,000 in tuition. Our rector understood that the way to a bishop's heart was food -- and strapping young men, flitting about, drunk on the Church's salvific mission. Therefore, he catered the annual breakfast.

Attendees were plucked from the student body according to certain parameters:

First selected were the sole seminarians from a diocese. No one wanted to be the doofus whose idiosyncrasies convinced his bishop to sever historical ties with the oldest seminary in the nation. These fellows had to sell their bishops on the school at all costs and recruit a diocesan brother.

Next chosen were the handsomest, 20-something seminarians. We were charged with winning new bishops to the fold. Nothing impressed a crusty bishop more than a beautiful boy hungry for holy father's attention. After four straight years in attendance, I knew the unspoken drill. Conservatives targeted the right-wing bishops, liberals the left-wing ones. Theological crossbreeding was forbidden.

Finally, most of the African Americans, Latinos, Asians, and Africans were conscripted. The white-washed conference needed to see how St. Mary's reflected the "small-c catholic" church that the bishops prided themselves on representing.

As for those lacking in physical blessing or from well-represented dioceses, they were left behind at the seminary, full of rejection and resentment.

Our sentry dashed in from the lobby proclaiming, "The bishops are coming!" The rector barked last-second talking points. We straightened our jackets, brushed one another's shoulders, and yanked at our sleeves to display our gold-crucifix cufflinks.

The bishops descended. Their short break rushed past, a mélange of fruit Danishes and seminary statistics. We preached the wonders of St. Mary's. They nodded benevolently. We admired their jeweled pectoral crosses, they our enthusiasm. Some conversed in close proximity with their hands on our elbows or biceps.
We laughed at their stale jokes and offered fresh coffee. They struggled with our names, while we calculated their levels of interest. The savvier seminarians teased out common ecclesial acquaintances, hoping for the opportune connection: a St. Mary's alumnus. The active bishops hustled off to deliberate the fate of the American Church, while a smattering of retired guys dallied, collecting smiles and sweet rolls.

After the courting concluded and our rector-pimp congratulated us on a job well done, we exited the hotel. As we waited to enter the bus, I felt the gaze of the gay protesters. Fear whipped through me like the bitter wind scouring the Capitol. A diocesan brother of mine, who'd come out of the closet, had just dropped out of seminary in Washington. He was angry about the Church's harmful teachings and treatment of gay Catholics. I'd wished him well and justified my ongoing choice to remain.

Church teachings didn't evolve overnight, but they would. The worst sin a cleric could commit was to scandalize the faithful. Of course the bishops were slow to change; they were avoiding scandal. Progressive priests were needed to effect change. We'd remind the bishops how Jesus embraced society's marginalized and vulnerable. We'd minister to those whom current teachings caused anguish and nurture their patience. In time, psychology's acceptance of homosexuality would trickle up into the college of bishops. They would come to see the pain their teachings caused gay Catholics. The arc of change in the Church was long.

Still, I prayed not to see my friend's frosty face among the protesters. As our line meandered past them, I wasn't the only seminarian with my eyes downcast, frightened that if I looked a gay in the eye, he would know. His glare would strip away my shield of celibacy and proclaim me a known homosexual.

Slouched behind the safety of the reflective windows, I watched the protesters' frozen exhalations rise through beams of low morning light like incense at the altar. No one onboard spoke of them. We silently accepted their judgment. Then we were whisked back to the safety of the seminary and the corresponding compartments of our collective clerical closet.

Today, I stand with the protestors. The Catholic bishops continue to hide behind the reflective windows of their anti-gay teachings. Recent polling reveals that the majority of American Catholics favor same-sex couples' right to marry (52 percent, according to a Pew Research poll). I can only hope that more of them will be scandalized, step off the bus, and call bishops such as Cordileone to task for their bigoted politics.
Posted by Paris Arrow at Thursday, August 18, 2011