Satanas JP2 Blood worshipped in Colombia while he was still alive!

Here is how Opus Dei is building their biggest Golden Cow John Paul II with the poor people of deceiving them and then stealing all their natural and human resources into the Vatican Bank.  In January 2005, before he died on April 2 by euthanasia, John Paul II's blood was drawn and shipped to colombia for worship.  That is how presumptous and sure the Opus Dei were of their Golden Cow was already a "living " saint that he would be worshipped while he was still on earth.  Of course, after 27 years of papacy and Opus Dei cover-up, we finally revealed that "Holy" John Paul II had 2 evil Achilles Heels Cardinal Bernard law and Fr. Marcial Maciel, read our article
Heil Satanas JP2 Patron Saint of Pedophiles, Pederasts Rapists-Priests! John Paul II is the same yesterday and today-- he cannot protect children http://jp2m.blogspot.com/2011/05/heil-satanas-jp2-patron-saint-of.html

The blood of John Paul II has arrived in . “His blood is the symbol of life, says  Father Slawomir Oder.
http://ivarfjeld.wordpress.com/2012/01/22/holy-blood-of-john-paul-ii-arrive-in-colombia/ 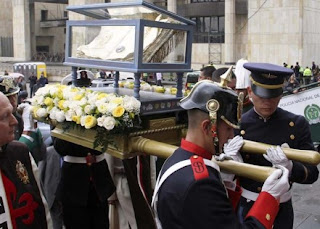 The small round cylinder inside the glass mounter contains a sample of the blood of the late Pope, ready to be carried through the streets of .
The relics that arrived ion 20th of January consist of a small vile of the late pontiff’s blood which was extracted by medical officials before his death in April of 2005. 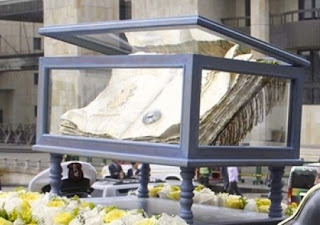 The small container with Papal blood is kept inside the glass monter. 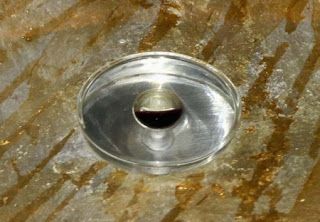 Some few drops of blood of the late Pope is transported like this to .
“His blood is the symbol of life, life given for God and for others and its presence reminds us of the Christian vocation to spend one’s life loving God and neighbor,” said Father Slawomir Oder, postulator of John Paul II’s cause for canonization and custodian of the relic.

On Jan. 21 the relic will be venerated during a Mass celebrated by Archbishop Ruben Salazar Gomez of at the parish of Mary Queen of Heaven. On Jan. 22 the relic will travel to the city of .
Source: Catholic News Agency (CNA).

To brand the blood of a created being as “holy”, is outright blasphemy. 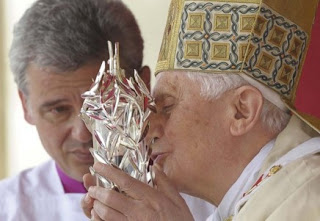 The Pope worships items of dead people, also tapped blood of a mortal man who was crippled in his old age.
Romans 5:9
Since we have now been justified by his blood, how much more shall we be saved from God’s wrath through him! 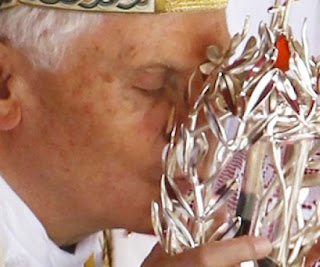 The Pope closes his eyes, kisses and adores blood taped from John Paul II before He died.
Hebrews 10:29
How much more severely do you think someone deserves to be punished who has trampled the Son of God underfoot, who has treated as an unholy thing the blood of the covenant that sanctified them, and who has insulted the Spirit of grace? 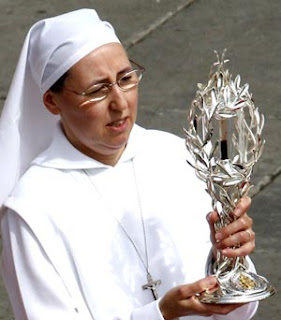 A nun carries the "Holy blood" in a silver monstrance.
Hebrews 10:4
It is impossible for the blood of bulls and goats to take away sins.

The pictures of the present Pope kissing a container with the taped blood of the late Pope is bizarre and horribly wicked.
Would you like to tap the blood of your neighbor, and carry it on your shoulders?
What about carrying it down the streets in a small container, wearing an old Otto Von Bishmack helmet? 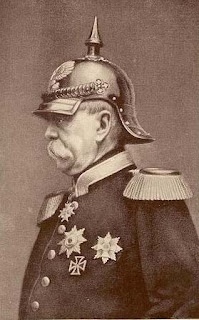 Otto Von Bichmark.
Satanists tap blood of chickens, and use it for the worships of spirits. Just like a chicken, the Pope was cut, and his blood kept for adoration and veneration after his death.
In regards to Roman Catholic doctrine, there is confusion in the camp. The Pope is not yet  a “saint”. His exit from Purgatory is not confirmed, and no one knows if he can listen to the worshipers prayers.
Still they offer incense before the container with his blood. 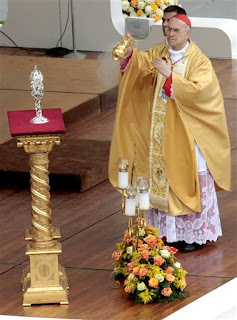 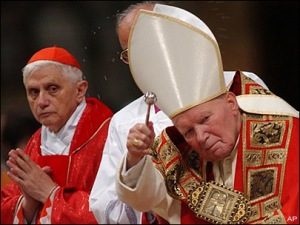 The two Captains of the Vatican Titanic Ship
John Paul II and Benedict XVI Cardinal Ratzinger
The present Pope hail the blood tapped from the old and dying John Paul II.
Jesus never sinned, and His blood is holy.
John Paul II was a sinner. He was extremely sick in his last days, suffering from Parkinson disease.
Is his blood contaminated?
Shall people bow before such blood, close their eyes, pray and kiss the container?
What a damnable hell bound priesthood.
You brood of vipers., who leads hundred of millions of people towards the gates of Hell.
Repent, or burn in the everlasting fire.
Written by Ivar 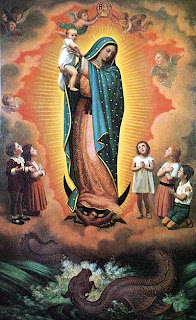 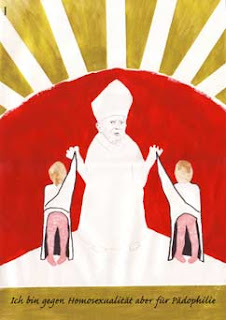 The Danish cartoonist of the prophet Mohammed portrayed John Paul II as the Pope of Pedophilia with the inscription "I am not for homosexuality but for pedophilia".

In this Danish cartoonist image, John Paul II is the Sun as the Infallible most powerful Pope of the Catholics with seven rays of the 7 Sacraments, he is in his white papal uniform and his two papal hands pulls up the children"s robes because he enabled and allowed thousands of pedophiles rapists-priests to go on freely sodomizing and raping little boys (and girls) during his longest reigning papacy of 26 years, together with Cardinal Josef Ratzinger his right-hand man. See more on the Danish cartoonist describing about John Paul II on Danish radio http://jp2m.blogspot.com/2007/10/john-paul-ii-portrait-by-danish-artist.html. 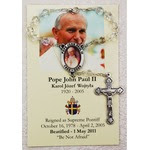 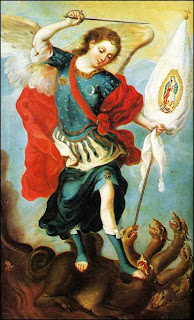 John Paul II in the Basilica of Guadalupe in Rome 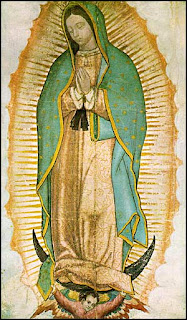 The original image of Our Lady of Guadalupe in Mexico revered by beloved companions John Paul II and Fr. Marcial Maciel who built the Legion of Christ Guadalupe Basilica in Rome where is now buried see http://jp2m.blogspot.com/2008_07_01_archive.html