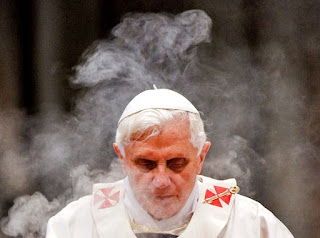 Those 1.2 billion Catholics want to smell like -- Benedict XVI who makes Devil's Bowels smell like roses at the Vatican?  That would not be a surprise because those same Catholics are worshipping the Opus Dei Golden Cow John Paul II calling him Blessed while chanting "JP2, we love you".  Catholic Latin masses and rosaries numbed the conscience of John Paul II and Cardinal Ratzinger and therefore they also numb the conciences of Catholics.  Benedict XVI  as Cardinal Ratzinger was the other hand of John Paul II who steered the Vatican Titanic Ship during the 27 years papacy of the JP2 Army - John Paul II Pedophile Priests Army and his Crimes against Humanity are awaiting the attention and decision of The Hague.  We pray that The Hague will soon call him to trial before he falls ill or dies.  Let the Vatican Dream Team of legal international lawyers show their true colors as they try to salvage the sinking Vatican Titanic Ship sinking in moral bankruptcy and at its helm is the worst criminal pope in Christendom.

Read our related articles: The Nazis and the John Paul II Pedophiles Rapists-Priests Army were both an inherently evil all-male elite hierarchy born from the Devil's bowels http://jp2army.blogspot.com/2011/01/nazis-and-john-paul-ii-pedophiles.html

The Devil’s bowels smell like roses in the Vatican http://jp2army.blogspot.com/2010/12/devils-bowels-smell-like-roses-in.html

Saint? John Paul II slept in peace at the Vatican knowing that Fr. Marcial Maciel plus thousands of pedophile priests were raping thousands of boys http://jp2m.blogspot.com/2011/02/saint-john-paul-ii-slept-in-peace-at.html

The Nazis of Hitler and the Roman Catholic Church of Benedict XVI they both burn human beings in Auschwitz and in Hell http://pope-ratz.blogspot.com/2011/02/nazis-of-hitler-and-roman-catholic.html

Spiritual healing, the Eucharist and the Rosary bring NEITHER JUSTICE NOR SAFETY FOR CHILDREN, the preys of the John Paul II Pedophile Priests Army http://jp2m.blogspot.com/2010/05/spiritual-healing-eucharist-and-rosary.html

St. Peter, “What is that smell?”
“Its pope Benedict XVI, Jesus,” said St. Peter
But he’s not supposed to die for another couple of minutes.
I know Jesus, but his cologne always gets there five minutes before he does!

As philosophers remind us, in every piece of humor is some truth. What possible truths could be associated with an 84 year old pontiff having a custom blended scent made for him to wear as has recently been reported in the Italian press? Maybe the toilet water in the Vatican is backing up or maybe the stench of the rotting empire is too much to bear. Then again, maybe this is what happened:

In the beginning there was clerical sexual abuse and then came all the hierarchal excuses for it. The excuses were nonsense and without merit. And darkness fell over the church, the victims and their families. And the victims, their families and the laity spoke among themselves telling each other, “This is a crock of shit and it stinks to high heaven.”

So the families went to the monsignor and said, “Clergy abuse is a bunch of crap and we can’t stand the stench!” And the monsignor went to the bishop and said to them, “Clerical abuse is like a container of excrement and a very strong one at that. The laity can’t stand it! The strong smell is driving people to leave the church.”

And the bishops pondered the excrement in sacred convocation and went to the Cardinals saying to them, “Clergy sexual abuse is a crock of fertilizer and the smell isn’t as bad as the laity would have us believe.

And the Cardinals discussed the problem among themselves and they said to one another, “Fertilizer is a good thing because it contains that which allows plant growth, provides food and nutrition.”

And the Cardinals went to the pope and said, “Clergy abuse will promote growth and provide nutrition. It will grow the church and benefit both the clergy and their flocks.” And the Pope looked upon the plan, saw that it was good, blessed it and the plan became policy.

This is how clergy abuse became policy and why the pope needs Toilette Water not Holy Water to keep the odor of corruption from his aging nostrils.
__________

Pope Benedict XVI has commissioned a bespoke eau de cologne. Photograph: AP
He is picky about his robes and his red shoes are tailor-made, but Pope Benedict has taken the meaning of bespoke to a whole new level by ordering a custom-blended eau de cologne just for him.
The fragrance, which mixes hints of lime tree, verbena and grass, was concocted by the Italian boutique perfume maker Silvana Casoli, who has previously created scents for customers including Madonna, Sting and King Juan Carlos of Spain.

Casoli said she had a "pact of secrecy" with her most illustrious client to date, and refused to release the full list of ingredients that had gone into his scent – but she did reveal that she had created a delicate smelling eau de cologne "based on his love of nature".

Casoli's scents first came to the attention of Vatican elders when she was commissioned to create fragrances for Catholic pilgrims to Santiago de Compostela in Spain. The two she supplied, Water of Faith and Water of Hope, were liked so much by local priests that they presented samples to the Pope, the Italian daily Il Messaggero reported. Alerted to Casoli's talents, Benedict put in a request for his own stock of scent. The Vatican has previously played down reports that the 84-year-old pontiff is a snappy dresser, arguing that his unusual hats, including a red panama, reflect his respect for papal tradition rather than an eye for fashion.
And anyone keen to smell like the pope will be disappointed. "I would not ever repeat the same perfume for another customer," Casoli told the Guardian.

She describes her ready-to-wear perfumes, which are accessible to all, as "made with noble and rare essences which leave an unforgettable olfactory message for him and her".

The line, which features "sensually elegant" men's fragrances, also contains a scent named Perfume of Italy, which sums up the smell of Italy's "seas, mountains and countryside", and a perfume called Cannabis, which is described as hypnotic.
One that bishops and cardinals might wish to avoid is Nude, a scent inspired "by the smell that only a woman's skin emanates in a state of ecstasy".
Posted by Paris Arrow at Friday, March 23, 2012