Of crimes against humanity for the purpose of hiding and trading the proceeds of crime (1934 to present day): That Swiss Catholics did enable a law to be passed in 1934 making the disclosure of Swiss Bank accounts a serious crime. That the purposes of this corrupt and inhuman law were to: (1) Enable money funneled in and out of the Catholic Church via the Vatican Bank to be transferred to a safe haven for further distribution; (2) To provide a specific second funnel for repatriation of profits for American Catholic influenced companies from Germany; (3) Provide a second safe point and level of money laundering for criminal finance should the Vatican Bank ever be compromised or disrupted.

Of publishing a false statement and establishing and unlawful enterprise for the purpose of Crime (1929): That the Vatican having promoted and supported the career of Benito Mussolini was granted upon his election as Prime Minister a formal treaty known as the Lateran Treaty which
(1) created the state of the Vatican City and guaranteed full and independent sovereignty to the Holy See;
(2) That the pope was pledged to perpetual neutrality in international relations and to abstention from mediation to a controversy except when specifically requested by all parties;
(3) a concordat establishing Catholicism as the religion of Italy;
(4) a financial arrangement awarding money to the Holy See in settlement of all its claims against Italy arising from the loss of temporal power in 1870; and
(5) to redefine the the canon sin of usury, to not mean gains from money lending, but rather simply profiting "exorbitantly", thereby enabling the spiritual and legal framework for establishing a bank completely controlled by the Catholic Church.

That in spite of Mussolini being known as both a mass murderer, facist and war criminal, the Vatican has continued to main the legitimacy of these treaties to the present day. That the agreement effectively made the Vatican a separate state in the middle of Italy and free to continue to operate under diplomatic immunity.

Of establishing an unlawful enterprise for the purpose of crime and funding criminal activity (1929 to present day): That upon the securing of diplomatic immunity of the Vatican, Pope Pius XI did immediately authorize the establishment of the Istituto per le Opere di Religione (IOR) or Institute for Religious Works, also known as the Vatican Bank. That under the protection of the Lateran treaty of war criminal Mussolini, the Catholic Church did establish the first bank in history: that had full diplomatic immunity, that was complete controlled by a major religion and did not have to disclose its banking records, nor charter.

That the purpose of the Vatican Bank upon its formation were:
(1) To fund criminal enterprises including war, terrorism, drug trade expansion, assassination, and revolution;
(2) To invest in industries that promote social breakdown and dependence including arms trade, drug trade and media
(3) To launder the profits of various branches of the Catholic Church including the Mafia (established by the Vatican in 1870), the Nazis (established by the Vatican in 1921), the Jesuits and other criminal enterprises controlled by the Catholic Church including the Federal Reserve Bank System of the United States (1913).

Of obtaining property by deception (1933 to present) That the Roman Catholic Church of Germany has received and continues to receive payments by the taxpayers of Germany equating to a church tax consistent with the terms of a Concordant signed by Adolf Hitler and Pope Pius XI immediately upon Hitler gaining control of Germany.

That the historic claim of these taxes date back to Aristocratic tributes to Rome in light of the loss of the Papal States under Napoleon in the 19th Century.

That these payments to the Vatican have remained intact and have consistently been paid since 1933 before Word War II, during World War II, during the split of Germany and Communism and now under the unification of Germany.

That these payments constitute the obtaining of property by deception in claiming the Roman Catholic Church to be both an institution of public good and a lawful organisation.

The the total property earned by this criminal organization by stealing from the taxpayers of Germany since 1933 is between $20 and $50 Billion (2006 US equivalent dollars).

Of crimes against humanity for the purpose of hiding and trading the proceeds of crime (1934 to present day):

That Swiss Catholics did enable a law to be passed in 1934 making the disclosure of Swiss Bank accounts a serious crime. That the purposes of this corrupt and inhuman law were to:

(1) Enable money funneled in and out of the Catholic Church via the Vatican Bank to be transferred to a safe haven for further distribution;

(2) To provide a specific second funnel for repatriation of profits for American Catholic influenced companies from Germany;

(3) Provide a second safe point and level of money laundering for criminal finance should the Vatican Bank ever be compromised or disrupted. 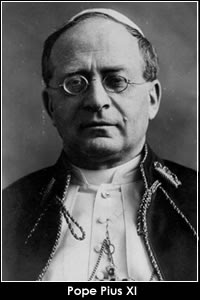 Background Achille Ratti was born in Desio, province of Milan in 1857, the son of a wealthy industrialist. He was ordained as a priest in 1879. He obtained three doctorates (in philosophy, canon law and theology) at the Gregorian University in Rome, and then from 1882 to 1888 was a professor at the seminary in Padua.

Ratti's career took a sharp turn in 1918. Pope Benedict XV (1914 – 1922) asked him to leave the Library and take on a key diplomatic post: apostolic visitor, (that is, papal representative), in Poland, a state newly restored to existence, but at that time still under effective German and Austro-Hungarian control.

In 1919, he was promoted to papal nuncio and given the title of archibishop. In June

1921 Ratti was recalled to Italy to become Archbishop of Milan. Benedict XV made him a Cardinal at the same time.

In January 1922 Pope Benedict XV died unexpectedly. Ratti was elected Pope on February 6, 1922 on the fourteenth ballot, taking the name of Pius XI

On becoming Pope, he issued the Papal Bull Ubi arcano, promulgated in December 1922, inaugurated the "Catholic Action" movement. The idea was to involve "chosen" lay men and women in an organisation, under the close supervision of the bishops, which would actively spread Catholic values and political ideas throughout society, taking control of governments to favour the church.

Pius XI also gave his approval to specialised movements like the Jocists, associations of young Catholic industrial workers who aimed to Christianise the workforce, and provide a Catholic alternative to Communist and socialist trade unions.

Similar goals were in evidence in his encyclicals Divini illus magistri (1929), making clear the need for Christian over secular education, and Casti Connubii (1930), praising Christian marriage and family life as the basis for any good society, condemning artificial means of contraception.

To help combat democratic capitalistic models of government and promote their replacement with facist regimes, Pope Pius XI published the encyclical Dilectissima Nobis (1933), in which he addressed the situation of the Church in Republican Spain, he proclaimed, that the Church is not "bound to one form of government more than to another, provided the Divine rights of God and of Christian consciences are safe", and specifically referred to "various civil institutions, be they monarchic or republican, aristocratic or democratic".

The effect of this Papal Bull, enforced throughout every Catholic community in the world, was to promote the cause of facist government models.

He established Vatican Radio in 1931, and was the first Pope to broadcast on radio.

While Pope Pius XI was modern in the use of media as a propaganda tool, the Pope was thoroughly orthodox theologically and had no sympathy with modernist ideas that relativised fundamental Catholic teachings. He condemned modernism in his writings and addresses.

On the 8th July 1933, the Vatican signed a Concordant with the Nazis regime in Germany. The German representative on behalf of Adolf Hitler was Franz Von Papen.

Politically and morally, the Concordant was unprecedented in its range of concessions. From the date of its signing, all Catholic Bishops and clergy were ordered by the Vatican to pledge an oath of allegiance to Adolf Hitler- effectively turning the entire Catholic apparatus into a state tool of the Nazis (or vice versa).

The agreement also had two immediate effects, the first being that the Nazi Third Reich would pay a significant annual sum to the Vatican in "recognition" for the lost revenues of the Catholic Church since losing the Papal States. In exchange, the Concordant provided the Nazis the highest possibly international credibility as a legitimate government, and not as a temporary holder of power. Thanks in no small part to Pope Pius XI, Adolf Hitler from July 1933 onwards was seen as a legitimate international leader.

This Concordant and the position of Adolf Hitler continues to be honored to this day by the present German Government and every previous government since 1933 in continuing to pay the Vatican what has amounted to Billions of dollars of blood money, tax free.

The government of Mexico in the 1930s embarked on severe anti-clerical measures. (Disputes related to the Catholic Church had long been part of the history of Mexico.) In the state of Tabasco the Church was in effect outlawed altogether. Pius XI condemned the Mexican government in his 1932 encyclical Acerba Animi.

The republican government which had come to power in Spain in 1931 was also strongly anti-clerical, secularising education and expelling the Jesuits from the country. This encouraged Catholics to support the military coup against the Republican government in 1936 led by General Francisco Franco.

Pope Pius XI died on February 10, 1939. He was succeeded by his Cardinal Secretary of State who became Pope Pius XII.

America, WAKE UP and SEE the Victims in USA - Attackers - Responsible Leaders

Bill Donohue-Catholic League ad in New York Times is a brilliant strategy before the beatification of John Paul II http://jp2m.blogspot.com/2011/04/bill-donohue-catholic-league-ad-in-new.html

Fr. Murphy in the Evil Eyes of Benedict XVI On 'Today' Show: Religious Leader Tells Americans To 'Continue The Faith In Christ' http://pope-ratz.blogspot.com/
Posted by Paris Arrow at Friday, June 10, 2011