Is the Vatican a state or country? It is only one building and one public square but it is a country like the vast USA, Russia, China??? 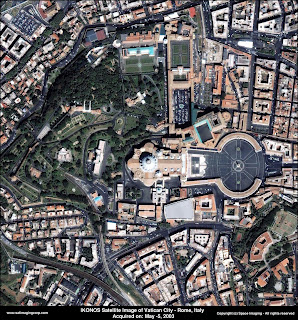 Is the Vatican a "state" or country? It is only one building with a public square -- and no children and women are allowed to live there. Actually it is a homosexual building!

Is the Vatican Truly an Independent State?

With extraordinary synchronicity I had just proposed in my last post, which I had not yet even published, that we should seriously question the Vatican’s claims to be treated as an independent state, when I saw an opinion piece in the LA Times on exactly the same topic.

The problem with the Vatican’s present status as a “state” is not just that is a quirky little oddity, an peculiar little legacy of the historical interrelationship between it and the rest of Italy, nor is it even that it leaves the Vatican beyond the legal reach of any external authority. No, it is worse. There are other tiny states (not quite so small) which are truly independent, and are not a problem to anyone. The real issue is that the Vatican’s claims are so one-sided: while their insistence on independent status excludes any other state from interfering in their internal affairs, they do not respect the balancing principle. Through their army of clerical staff, all under direct or indirect Vatican control, they are constantly busying themselves with the affairs of the entire world. They dictate moral rules to individual citizens, and they regularly attempt to influence the political process – as is seen most dramatically on abortion, marriage equality and gay adoption.

It is not right that they should be allowed to get away with these double standards. Which major country will be the first to withdraw recognition of the Vatican “state”?

From the LA Times:

Consequences of the Catholic Church’s claim of statehood

The practice of treating the Catholic Church as a state has been bad for women’s equality and gay rights. Now, the unfolding sexual abuse scandal reveals another dark side of the Holy See’s status.
Giuseppe dalla Torre, a top Vatican legal advisor, declared in a preemptive strike last week that Pope Benedict XVI could not be sued in an American court. His statement — in response to allegations that the pope played a role in covering up, among other scandals, the sexual abuse of children at a Wisconsin school for the deaf — was unequivocal. “The pope is certainly a head of state, who has the same juridical status as all heads of state,” Dalla Torre said, which grants him immunity from foreign courts.

But is the spiritual leader of the world’s Roman Catholics really a “head of state” as well?

Benedict XVI is the head the church’s governing body — known as the Holy See — which claims many of the privileges of a sovereign country. In recent decades the Holy See has welcomed ambassadors, signed international treaties and used its status to influence developments at the United Nations.

That the Holy See is often treated as a state is deeply troubling, for several reasons. For one thing, the Catholic Church isn’t truly a sovereign nation; to allow it to play one on the international stage perverts the meaning of statehood.

Moreover, the church’s claim to statehood gives it even more political influence than it would otherwise wield and grants outsized power to only one of the world’s many religions. And its claim is particularly worrisome now that the church — embroiled in a disturbing scandal that has reached from Boston to Berlin — is claiming the sort of immunity enjoyed by prime ministers and presidents.

How did this situation come about? The concept of sovereign statehood first developed in 17th century Europe, where the church was long treated as a quasi-state by Western powers. The Papal States existed within Italy for centuries. At their height, the Papal States comprised most of central Italy and parts of what is now southern France.

Despite opposition from many quarters, the Reagan administration initiated formal diplomatic relations with the Holy See in the 1980s. Today, nearly every country maintains diplomatic ties, and the Holy See is a “permanent observer state” at the U.N. This persists despite its lack of most of the key legal characteristics of statehood.

As to the question of territory, there exists only the small parcel of land known as Vatican City. But as any visitor knows, Vatican City is in the middle of Rome and is little more than half the size of the Mall in Washington, D.C. In any event, the Holy See continues to claim that its international status is based on its religious authority, not its territorial enclave.

To say that Vatican City possesses a permanent population of the sort envisioned by international law is even more of a stretch. Most residents are simply members of the church hierarchy, a body composed solely of men. They number less than the student bodies of many high schools — about 800. As to the Catholics of the world, they are already represented by the governments of other nations.

Vatican City does have a functioning bureaucracy, and so has a government of sorts. Yet it is surely the most unusual government of the world, given its minute size and lack of any standard government functions, such as the administration of justice, education of the young or provision of defense. It even relies on Italy for its water, police and firefighting services.

For decades the strange practice of treating the Catholic Church as a state has been bad for women’s equality, gay rights and reproductive freedom. The Holy See’s fictive statehood allows it to promote its retrograde views on gender and sex in diplomatic settings and during treaty negotiations.

Now, the unfolding sexual abuse scandal reveals another dark side of the Holy See’s claim to statehood: the extraordinary immunities claimed by the pope in the face of conspiracy accusations that span the globe.

Pope Benedict XVI’s predecessor, John Paul II, recognized the tenuous claim to statehood. When Vladimir Putin visited Vatican City some years ago, he offered to invite the pope to Russia. Russian Orthodox leaders opposed the pontiff’s visit, seeing it as an encroachment by Rome on their turf. Putin proposed a solution. As Putin later recalled, he told the pope: “I am ready to invite you as the head of state. I, as the head of state, invite you as the head of state.” The pope replied, “Look out the window. What kind of state do I have here? You can see my whole state right from this window.”
Posted by Paris Arrow at Friday, May 27, 2011